Two on the Road

The Texas photo from the collage Texas to New York/Oil, in the earlier post Trading Places, comes from Peter Spaans' project, On the Road Too. In 2007, the Dutch artist and his American friend, Dan Schmidt, drove from New York City to Las Vegas and back in 19 days. They decided that travel on older highways and state roads rather than the interstates. Spaans documented the trip with over 11,000 photographs, all made from inside the car; two of them can be seen below and more on the project site. 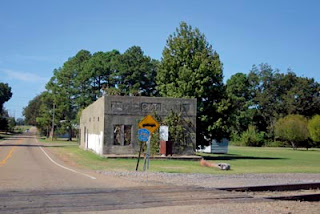 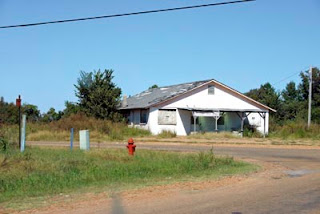 Here is a description, supplied by the artist, of how the photographs were taken:
On the outward journey, Peter Spaans generally captured his images from the open window on the right side of the car, or by the windshield. On the return trip, he frequently photographed from the back of the car, either right or left side, depending on the position of the sun, and always with the window open. Day in, day out he focused on fixed points such as the grandness of the natural countryside, or electric and telephone wires, petrol stations, motels, churches, restaurants; he pointed his camera at houses and factories either empty, boarded up and abandoned, or inhabited.

And here is the map, charting their journey through the "fly-over states": 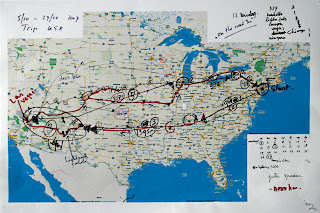