Mysteries of the Yards

The large format, almost square book is placed before you. New York from the Yards by Peter Spaans. You, by the way, are in your numbered seat in the New York Public Library's Art and Architecture Reading Room. You've seen a few photographs from it on the Internet, lovely black-and-white shots of the City in the early 1980s, but are largely unprepared for what it contains. 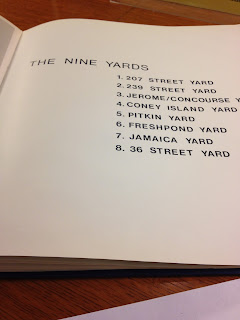 Mystery #1: How many yards? You soon learn from the translation of the Dutch notes that the book documents Peter Spaan's project of photographing the City from inside its subway storage yards. And that he had gained the permission of the MTA to do so. Under the title, "The Nine Yards," a numbered list is provided. With eight yards. Not all that mysterious, after all, as Peter explained to me in an email: "#3 Jerome/Concourse yards are two yards. The Jerome Yard, also known as Mosholu Yard, is located at 3191 Jermoe Avenue in the Bronx. The Concourse Yard is located in northern Bronx near 205th Street and Jerome Avenue."

The book also offers a spacial representation of the yards and how they are distributed throughout the city. A kind of typewritten map. The Coney Island Yard, #4 in the book, is at the bottom of the page because it is the southernmost one: 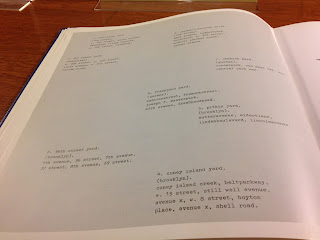 Mystery #2: What's the line? The photographs, and collages, are introduced with an essay by Spaans called "The Real Line of New York." What does Spaans mean by this enigmatic and rather beautiful phrase. Again, from Peter's email response to my questions: "That is a tough one. Many people have a preoccupied idea of what New York is and how it has to look. Because of films, TV, books, etc., etc., etc., we don't know better. What I tried to do was to photograph New York from the inside, using the big yards and photographing the surroundings of the yards and so portray in another way New York." 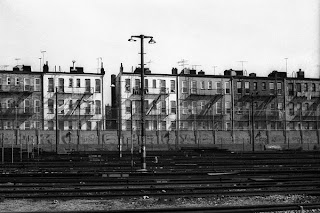 Mystery #3: Where are the people? Spaans' photographs give us buildings, trains, buses, and cars (many doubt belonging to employees of the yards), tracks and platforms, but very few people. In fact, I think there are more pairs of pants hanging out to dry in one photo from the Fresh Pond Yard than there are actual two-legged people in the whole book. Here's Peter: "I am very interested in people. But I don't photograph them that much, at least not always on purpose. Many empty streets, but the streets are not empty, just no people. There are many artists and photographers who only photograph people, and me just what people left behind, what people created."

The photographs on this page come from a 2011 issue of a new version of New York from the Yards released by Harper's Books in Easthampton in conjunction with a show of Peter's work on the project. You can see more at Harper's Books site. Which brings us to one more mystery: The original book grouped the photographs by yard following the order in the list above. The new book includes no indications of which yards the photographs come from. The line is shifting but ever present.